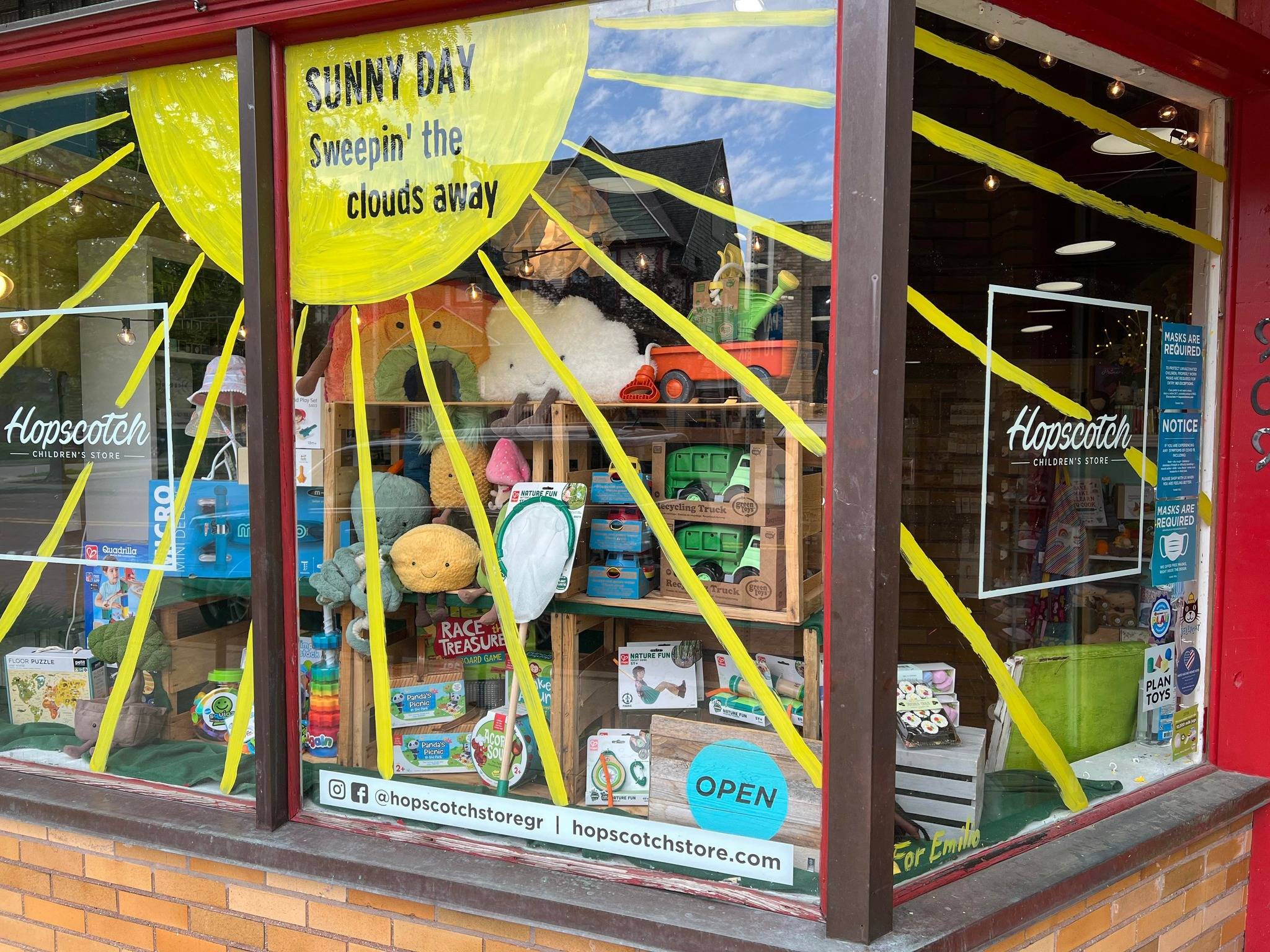 How did you begin working in the toy industry?

My husband and I both have backgrounds in marketing and we both worked in retail in
various capacities. The company we were working for filed for bankruptcy a couple of times and
was not doing too well. We were looking to make a change and we had always talked about
working for ourselves. I was on some type of mailing list and received an email saying that the
current Hopscotch store owners were looking to sell. It started off as a joke between my
husband and I, but we ended up speaking with the owners at the time and we realized that we
wanted to pursue acquiring the store. In fact, the company we had both been working for went
out of business, so we thought that this was our sign! The timing was perfect. We wanted to
make a change and we just had our son, who was 8 months old when we bought the store. So
we just fell into it, it was a new era in our lives!

When we first bought Hopscotch, it had been more of a natural parenting-based store which
focused heavily on baby gear. There were a lot of natural and organic products for babies and
moms and the store featured a large clothing section. When Hopscotch first opened under the
original owners, these were still considered to be specialty products. But as a lot of these types
of products became mainstream, they no longer worked as well at Hopscotch. Eventually, the
owners decided to shift into toys and gifts but that area wasn't really where their passion was
and that’s when they decided to sell the business.
When we took over, we started with a blank slate. The previous owners gave us boxes of
catalogues and we went through them all and decided what to carry. This helped us work on
rebranding the store. We also really focused on e-commerce.
So overall, the most challenging part about starting our business was deciding what type of
store we would be and what to carry, redesigning the store’s interior, shifting the focus to digital
marketing, and optimizing the store for e-commerce. It worked out well that my husband and I
went into this without other jobs! 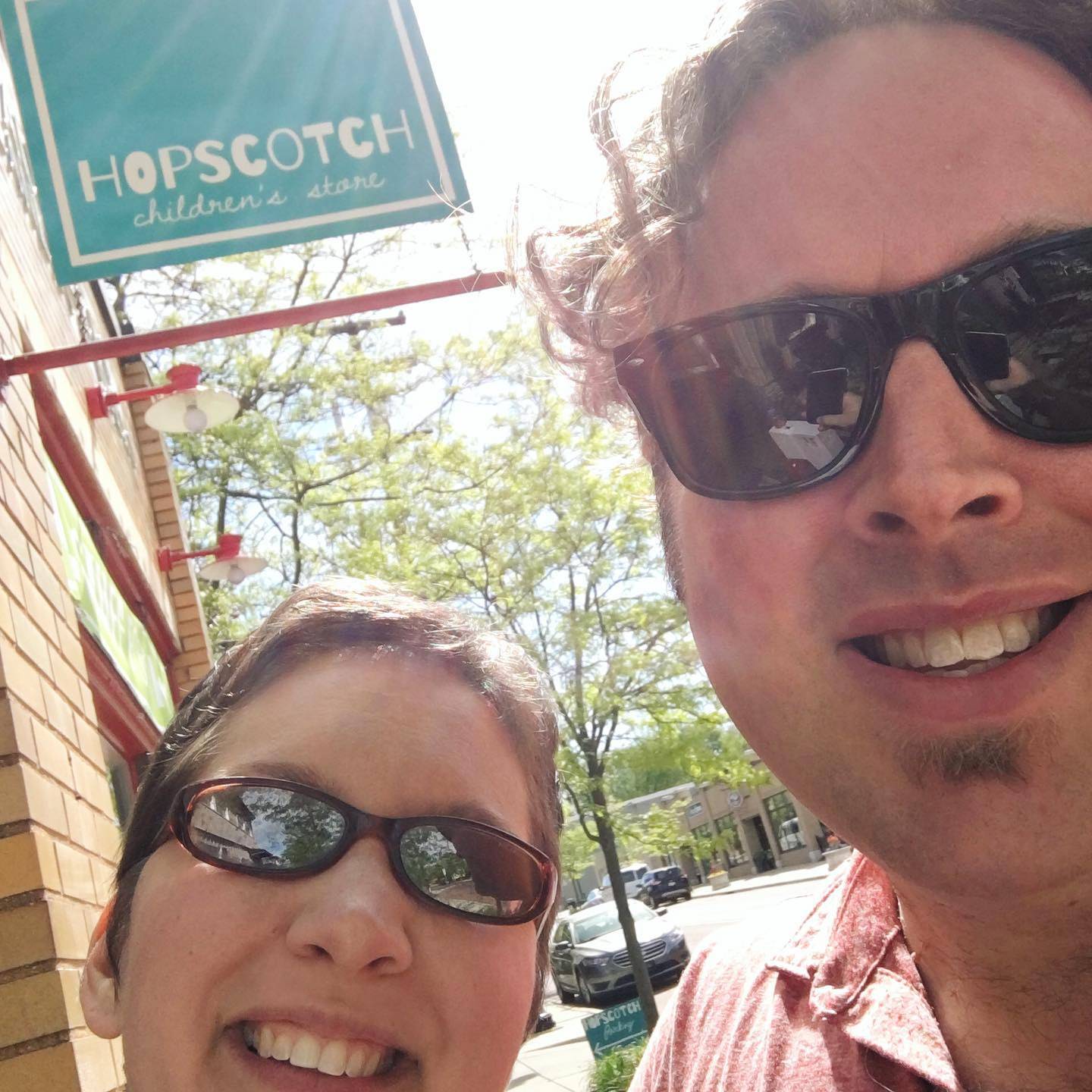 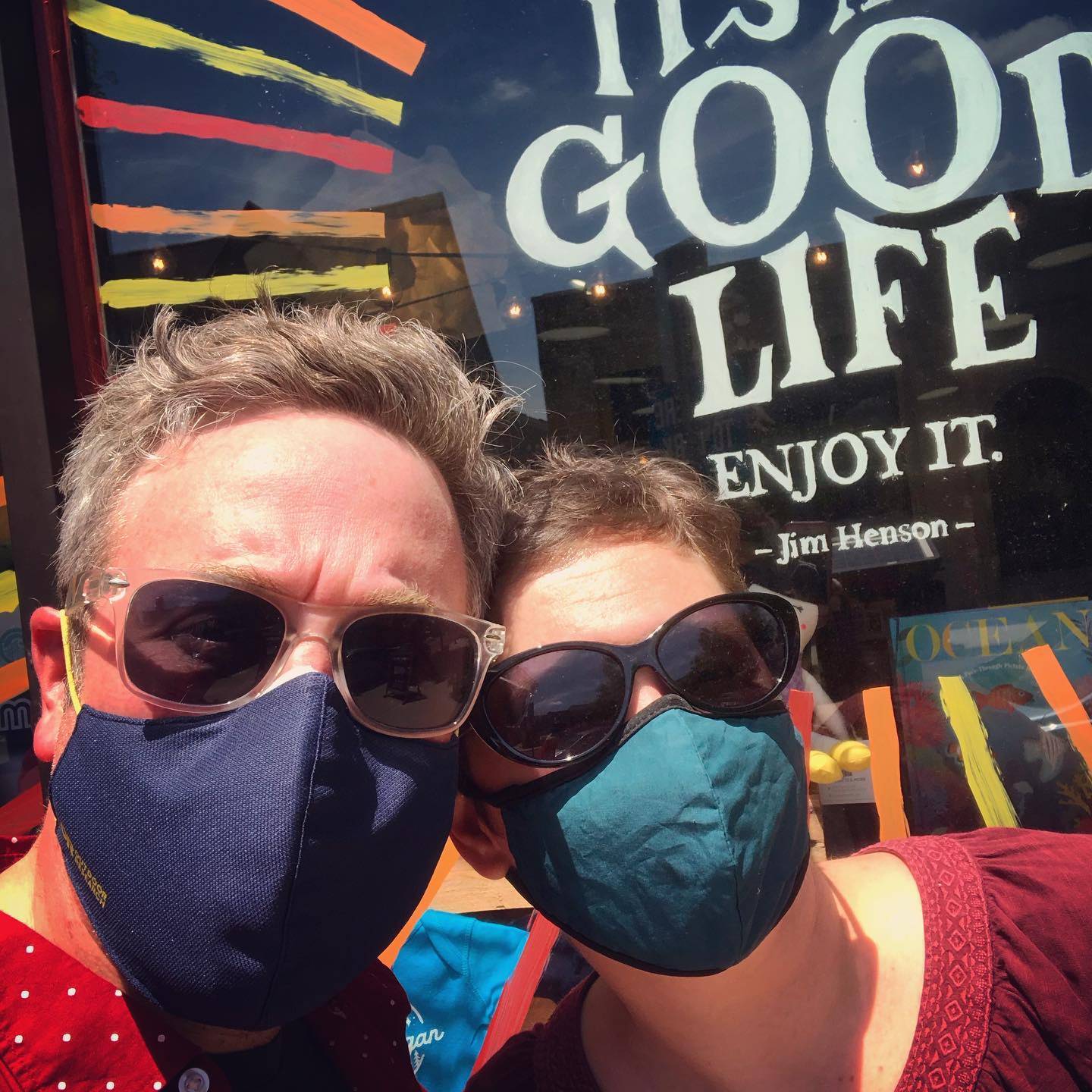 Are you still dealing with these challenges?

It’s an ongoing process. Our in-store challenge is trying to keep the product mix fresh and
updated at all times. We were really lucky that when the pandemic started we already had an
e-commerce business up and running. We had already started online sales and really ramped it
up in 2019, so when everything shut down, we pivoted to focus on the e-commerce strategy we
already had in place. But juggling different aspects of Hopscotch both online and in-store is an
ongoing challenge.

How have you seen the retail space change over time?
There's definitely been a shift to online shopping, although I would say that there's also been
a big shift over the last couple of years to “Shop Small” and to support small businesses. A lot of
people are talking about Amazon and the online shopping factor but I think that while these are
challenges, they’re also great opportunities. We have people from all over the country
supporting us because they want to support small businesses but don't have a local shop
nearby. So the fact that they can buy our products online is a great opportunity for us.

What do you think about the future of retail?

I don't think online shopping is going anywhere. People have gotten used to buying online
and are attracted to that convenience. I think that small businesses can embrace the
e-commerce aspect and not see it as competition.
I also hope that the “Shop Small” movement will continue. We've heard a lot of customers
saying that they wanted to keep small businesses afloat during the pandemic, especially at the
height of the shutdown. I think that this has allowed a lot of people to discover new small
businesses both locally and nationally. I think that once they’ve shopped at a small business,
they’ll see the benefit and will continue to do so. 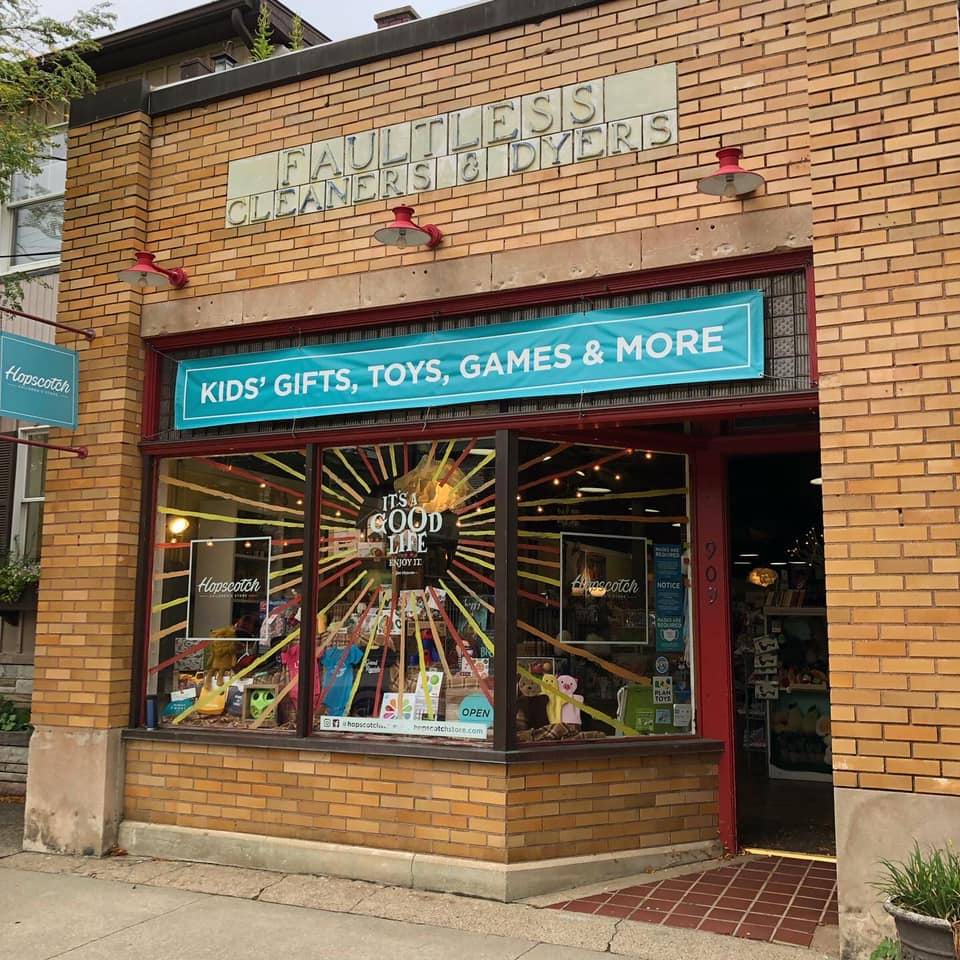 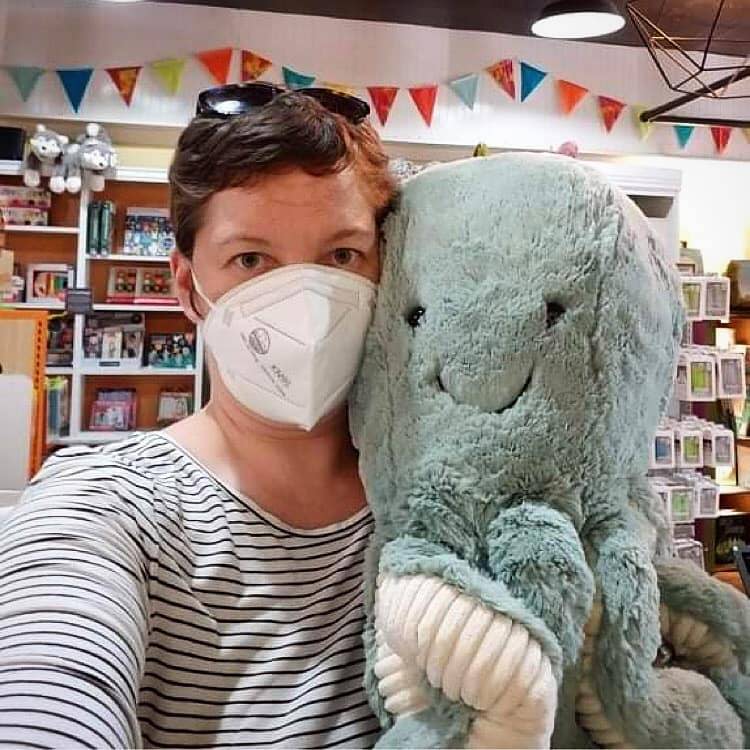 What is your opinion of Amazon and its role in the toy industry?

I won't pretend that I don't shop on Amazon. I think it absolutely has its place. I used to work
for a retailer that sold exclusively to Amazon, so I’ve seen different sides of the issue. The tricky
part between the toy industry and Amazon is the pricing. It’s always helpful when vendors are
stringent and don’t allow Amazon to undercut pricing. I think if the pricing in-store and on
Amazon was equal, people would be more likely to shop at small businesses. But if people can
find it for half-price on Amazon, they’re going to go with Amazon.
We don’t necessarily need to see Amazon as a monster that will destroy everyone and I think
that there are ways to compete. For example, at Hopscotch, we really focus on our customer
service on the e-commerce side. We offer same-day or next-day shipping and while we can't
always offer free shipping, I think that as long as you're willing to make that part of your
business, you can compete in some way.

It's so much fun and it’s so fulfilling to run this kind of business! I love seeing how happy and
excited customers get when they find a toy they know their kid will love. I also love staying on
top of toy trends and I get so excited when a new toy catalogue comes out! It’s really exciting to
grow your own business and have people come in and tell you that they love your store and
your product selection. When we order a new toy and someone comes in and buys it, it confirms
that we made a good choice! My husband and I love being in business together and building
something that's ours.

What was the funniest incident that ever happened?

During the first year of the pandemic, we closed our physical store and were just doing online
sales. Now, our storefront is open again and we have a lot of people bringing their one-year-olds
and two-year-olds to Hopscotch. It's usually their first toy store experience and sometimes it’s
even their first big trip out of the house! I really enjoy watching these kids come in and seeing
their eyes light up with wonder. It’s so fun to watch someone’s first toy experience let alone
someone’s first experience venturing out into the world!

If you'd like to learn more about Hopscotch Children's Store, feel free to visit their website at https://www.hopscotchstore.com/

You can also connect with them via social media!