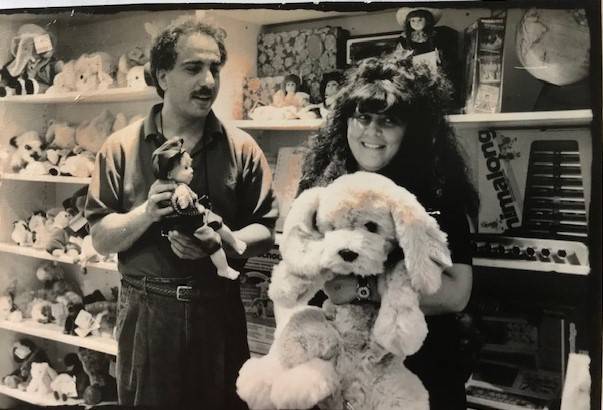 Kidlink Books & Toys is an independent book and toy store located in Montreal, QC, Canada. We interviewed owner Ramzi Soueida to learn a little more about his story.

How did you begin working in the book and toy industry?

In 1993, I was taking a leisurely stroll on Monkland Avenue in NDG with my brother, Bassem and our friend, Hania. We noticed that a toy store on the street went out of business. Hania immediately suggested that we should reopen this toy store. The idea did not resonate well with neither Bassem nor me since our educational backgrounds were in engineering. She insisted we reopen this Monkland toy store as is, as soon as possible, and add to the mix of toys and games a good selection of children’s books, which was exactly Hania’s expertise. After much deliberation, anxiety and sleepless nights, we decided to temporarily hibernate our Engineering degrees and finally agreed to take the plunge!

At the beginning, the selection of toys and games we offered was minimal. We had to rapidly increase the selection by finding good suppliers, reading reviews, listening attentively to customers requests and recommendations and then meticulously deciding what to order. As for books, Hania’s expertise made it very easy for us to choose the best children’s titles. We also added a small selection of good parenting books and some of the best cookbooks for adults.

Back in 1993, Kidlink was a very small store, it had less than half the area it now occupies. Being a very small store presented a huge challenge: we had to make sure that we chose only the best of toys, games and books to cram into such a small space. Those decisions were tough to make, so the three of us voted on each and every item that was selected and two votes were required before any item was ordered. We quickly realized how challenging this process would be. Soon after, we enlisted the children in our families, our friends' children and other relatives as consultants and testers to provide us with more input on all of the items. Despite their help, we knew that in order to transform Kidlink into a viable and successful toy store/children bookstore, we each had to work seven days a week at a rate of at least 80 hours per week. That meant not a single day off or vacation day during the first few years of running the business.

Are you still dealing with this challenge?

We were able to overcome this challenge five years into operating the business. Kidlink’s selection of books, toys & games continued to grow each year. We had to add shelving units on top of shelving units in order to make room for the newest arrivals. Soon, the store quite literally became a maze of tall shelves that nearly reached the ceiling. Fate had it that in 1998, five years after Kidlink began operating, the store next door became vacant. We jumped on the opportunity, leased the adjacent vacant store, knocked down the wall separating the two stores and…voila! Kidlink doubled in size. Hooray! We now can increase and further improve our selections.

The choice of children’s books, toys and games doubled almost instantly. We added a great selection of greeting cards and gift items for adults. People could now come to Kidlink to purchase a gift for a child, a teenager or an adult. Most importantly we were able to expand our selection of books beyond juvenile titles. We added fiction, non-fiction, gift books for adults and increased our selection of cookbooks. Throughout this time, we still followed the same golden rule of limiting the selection of books to only those titles that are deemed to be the best of the best.

During this time, Kidlink became a destination not only for people looking for toys and games, but also a destination for book lovers of all ages. Our book sales surged and we were ecstatic.

How has the pandemic affected your business?

Early 2020, a period we will all, unfortunately, forever remember — the period when we all realized that we were sailing in turbulent waters. Kidlink was forced to close its doors for almost three months. We had to adapt and improvise to stay afloat. While the doors of Kidlink were closed to customers, we started taking phone orders and we even resorted to WhatsApp Video and Facetime to help our customers find what they need. We offered same-day free delivery during that period to any customer living within a reasonable distance from Kidlink. The response from customers was overwhelming. They truly appreciated our initiative. We live in an amazing neighborhood. The community support for local businesses has always been there, but with the mess we are all in nowadays, that support just got stronger and stronger.

Our book sales skyrocketed. Also, many new customers started placing special orders at Kidlink for specific titles instead of doing so online. Whether in person or over the phone, we hear more and more customers telling us: “We want to support you guys.” The shop local phenomenon further confirmed that we live and work in the very best community.

How have you seen the retail space change over time?

While our book sales have kept growing, I remember one January, after the big holiday season, many of our customers told us they received an eBook reader as a gift.

Soon after, many of our book-loving customers started reading eBooks. As a result, our book sales dropped. We needed now, more than ever, to rely on our assets: Selection and Customer Service. We pride ourselves on our meticulous selection of books. Our customers know that when they shop at Kidlink, they are presented with only the best. If they need a recommendation, we are more than eager to suggest a book or two that we guarantee they will like. It took roughly a year and a half after the advent of eBooks for our book sales for adults to start picking up again. Many of our dear customers who switched to eBook readers earlier came back to printed books. They longed for the feel and the smell of a printed book, the flipping of the pages, the real bookmarks... sensations only a printed book could provide.

Moreover, the sense of community belonging also encouraged our customers to return to our physical store. Here, they can talk about the good book they have recently read. We tell them which books we liked or loved. We also like to promote books by local authors. We just love being a community bookseller. That is our asset, an asset that e-readers cannot beat! 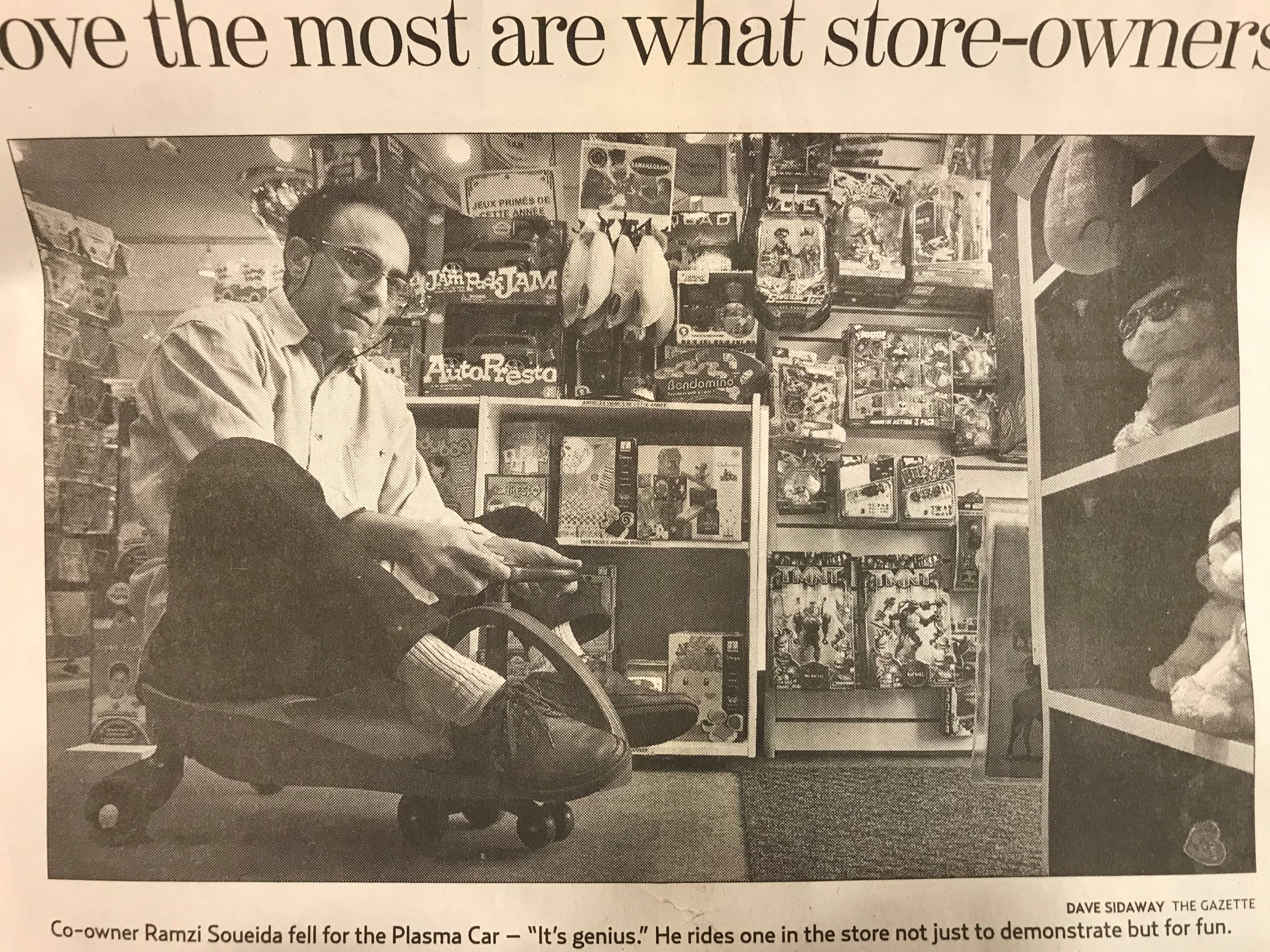 How has your client base changed over the years?

The change began a few years ago. One day, a father carrying his baby was standing at the front counter. The baby was probably one and a half years old. The father asked me: “ Do you recognize me?” While he looked familiar, I replied: “Sorry, but I don’t remember who you are.” He then said in a very cheerful way: “My name is Marc, I used to buy all my Legos here when I was young and I am here today to buy my son his first Lego-Duplo set.” I was speechless; I nearly teared up.

Our story began on a day in early 1993 when we were walking on Monkland, a moment that forever changed the course of our lives. Sometimes, I wonder where my life would be now if on that day I hadn’t taken that leisurely stroll. I tell myself, I’m lucky because I feel rewarded each time a child is happy with a toy and a grown-up is loving a book we recommend. I am very fortunate to work and live in a very supportive neighborhood. I am lucky because I live in Montreal, the best city in Canada and because I am in Canada, the best country in the world. For that I am extremely grateful and I owe my deepest gratitude to all the people that walked into Kidlink and supported us. They are the main reason behind our humble success. Just in case you are still wondering about those engineering degrees that we initially put temporarily in hibernation…well it does not look that they are going to wake up any time soon.